This is the beginning of a series about full Jenkins automation. I am calling that approach jenkins-as-code. The goal is to configure every aspect of Jenkins and its pipelines from a central git repository. We will leverage groovy scripting, jobDSL and shared libraries to not only codify the build/deploy pipelines (pipeline-as-code), but to also bootstrap and configure Jenkins from scratch (e.g., credentials, authorization, theme and job setup).

The following demo shows what we have at the end of this series:

Every aspect of what is shown here can be found in full context in the jenkins-as-code Github repository.

It is usually a good idea to have as much as possible setup in an *-as-code approach, because it offers:

In the first part of this series we will discuss the basics:

In order to avoid confusion it is very important to define the different layers and terms which will be used throughout this series.

Jenkins-as-code describes an approach to codify and automate every layer of Jenkins. In order to achieve its goal the approach leverages jobDSL, configuration and pipeline definition scripts.

A pipeline definition is a groovy script which is loaded by a job interface when a job is triggered. Those groovy scripts are also known as pipeline-as-code - an approach also known from cloud CIs like Travis or CircleCI.

A configuration script is a system groovy script, which interacts with the Jenkins eco-system to configure Jenkins and its plugins.

A jobDSL script is a groovy script which programmatically describes job interfaces. It is read by the Jenkins jobDSL plugin to create the job interfaces.

Layers and their Interaction

Interaction between the layers: 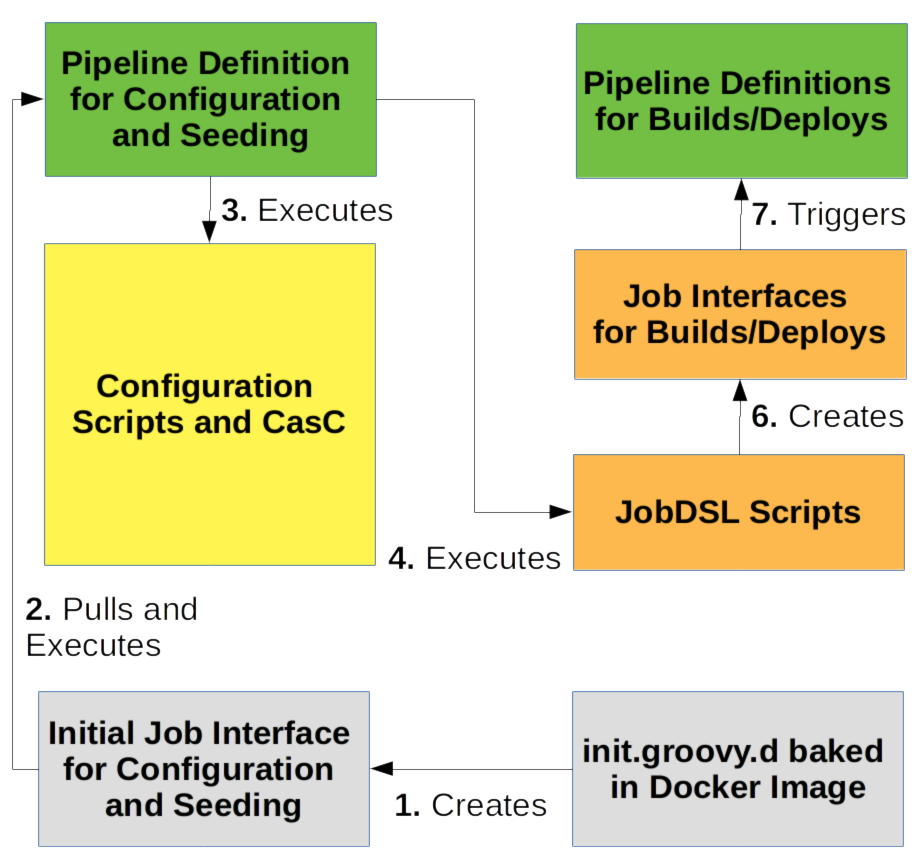 Now that we have covered some basics, let us begin with the hands-on work and create a docker image for our Jenkins.

We will use the following directory structure:

The following sub-sections show the files in detail.

We want to build an image which automatically bootstraps our Jenkins with an initial job interface for configuration and seeding.

NOTE: That Dockerfile also installs HashiCorp’s Vault. While it is not needed in this part of the series we install it anyways for later use.

Also, we must ensure that some plugins are installed.

Most of those plugins are not necessary at this step of the series, but might come in handy later on.

NOTE: Plugin versions are not pinned here as this is a demo. However, I recommend to pin the plugin versions inside the plugins.txt in order to have deterministic docker image builds.

The seed and configuration job interface is created through a jobDSL script.

NOTE: The script assumes that the SSH key is already created and mounted into the docker container. The corresponding public key must be uploaded to GitHub as a deploy key for the shared library repository in order for Jenkins to pull it.

When you build this docker image and start the container, init.groovy.d will add your (mounted) SSH deploy key and create the configuration and seeding job interface. When this interface is triggered, it will load the central shared library and run our pipeline defintions.

Lets have a look now at how our shared jenkins library looks like.

We will use the following directory structure for our shared library:

The vars directory will contain our job pipeline (build/deploy). Those pipelines will be called from a Jenkinsfile inside one of our projects, but we will focus on that in a later part of this series and can leave it empty. Also the resources/jobDSL directory which is intended for job definitions will be left out for now. We will come back to in a later part of this series. For now we focus on the resources/init and resources/config directories. resources/init holds initial configuration and seeding pipelines which leverage scripts in resources/config and resources/jobDSL to configure and seed jobs.

In addition, we need a configuration and seeding pipeline script in the shared library repository.

The scripts loaded and executed in this job definition, e.g., triggerConfigurationAsCodePlugin.groovy or timezone.groovy are discussed in the next part of this jenkins-as-code series.

The next part of the jenkins-as-code series will focus on the configuration scripts, e.g., OAuth authentication, theming, slack and credentials.