Since quite some time now we are no longer satisfied with only having our App Layer as code in repositories, but we also want every other component of our system codified. After Infrastructure as Code (e.g., Terraform) and Configuration as Code a.k.a. Continuous Configuration Automation (e.g., Ansible and SaltStack) approaches, we also want our automation itself codified: Pipeline as Code! Some of the big advantages of managing system components in code are:

External CI providers such as Travis or Circle CI made the Pipeline as Code principle very popular - especially amongst OSS Projects. Nevertheless, external CI providers may not support all of your Pipeline needs and even more important: A Pipeline may contain information you do not want to share with external providers. Personally, I pretty much trust the guys from Travis and for OSS projects they are way to go (not saying no to free checks and badges!), but if they get compromised the Pipeline data is exposed. Beginning with version 2, Jenkins finally supports the Pipeline as Code approach with the Jenkinsfile, which brings our Pipeline back into our own hands. In this post I want to outline how to build a simple codified Pipeline in Jenkins to containerize a Java project with Docker. I will solely focus on the Pipeline code. No Maven/Java code examples will be given here.

I am assuming that you have a Maven Project which builds target/project.war via mvn clean package -U.

Jenkins must have read access to your code repository (which can easily be established using deploy keys).

Jenkins must have Maven configured as a global tool referenced as M3.

For our Java project, let us build a pipeline which handles the following steps:

To get started, we first create a build.groovy file inside our Java code repository, ideally on a new branch, which we call jenkins.

NOTE: Some Plugins, such as the Multibranch Pipeline Plugin require that the pipeline code is in a single file called Jenkinsfile in the repositorie’s root.

The reason why we put the build.groovy on a separate branch is to decouple the app code from the pipeline code. Imagine you want to build a feature branch, but something in your pipeline changed. You would need to push a new commit with that pipeline change on the feature branch. This is especially bad, if you want to build a specific commit, e.g., a tag, since that would require you to re-tag. On the other hand this approach adds more complexity to your project, as an extra branch for pipelines may not be as intuitive as keeping the pipeline defintions with the rest of your code in the same branch. A better approach would be to use the Multibranch Pipeline Plugin, also because it is a requirement to get the most out of the new Jenkins UI Blue Ocean. However, in this post we are satisfied with a separate branch. The repositorie’s dir structure may now look something like this:

Initially, the build.groovy script may contain the following for testing purposes:

Now, we create a Jenkins Pipeline job, which checks out the jenkins branch of our project and looks for the pipeline file .jenkins/build.groovy. The configuration may look something like this: 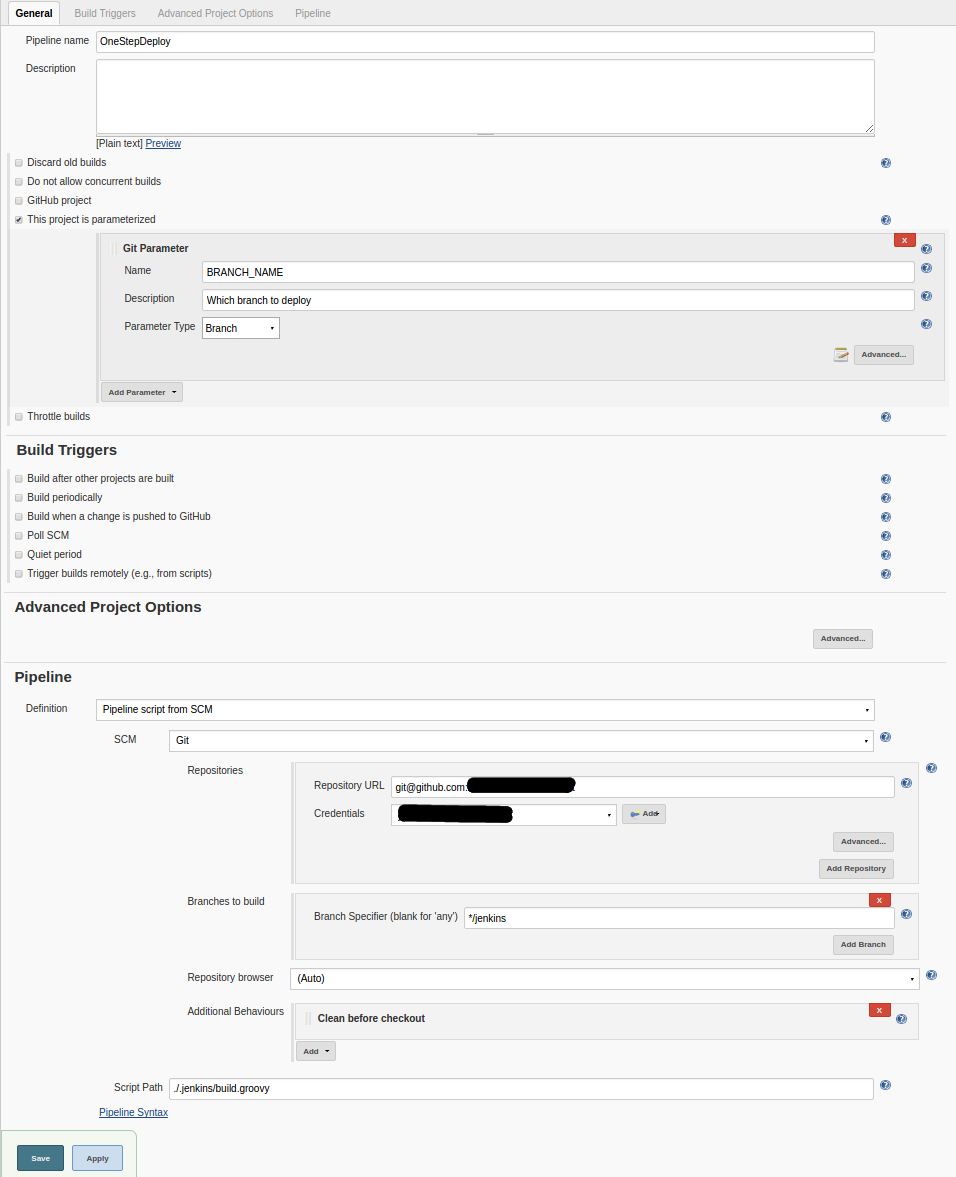 When we run this job, it should print The pipeline started in the job’s console output.

In a next step, we want to build a SNAPSHOT package of a branch. The branch is given as an input variable named BRANCH_NAME. It can be given to the job as a simple String input parameter or by using the Git Parameter Plugin and is referenced inside the pipeline script as env.BRANCH_NAME. We want our branch SNAPSHOTs to have the following version naming pattern: <version>-<branchName>-SNAPSHOT, where <version> is taken from the checked out pom.xml and branchName is given as an input parameter env.BRANCH_NAME.

Let’s extend our pipeline script to checkout and build the specified branch:

This pipeline checks out the specified branch, determines and sets the proper branch snapshot version inside the pom.xml and finally builds the .war file. Next, we move on to packaging our .war inside a Tomcat docker image. We create a docker build context in our project’s jenkins branch, which will give us the following directory structure:

The Dockerfile and docker-entrypoint.sh may contain the following:

IMPORTANT: By default the resulting container will run as root. This should be avoided if possible, since the root user inside the container has the same uuid as the host’s root user, which is potentially dangerous in case the container gets compromised.

The docker-entrypoint.sh allows our container to be configured via environment variables, making it more flexible to run in different environments. Further, we adjust our build.groovy script to build and push a functional docker image:

Note, that we also adjusted the Checkout stage, to copy the docker build context to another location before we switch branches (the build context might not be available on the new branch). Also, this pipeline does not contain important aspects such as testing or uploading of the .war file to a java package manager like Artifactory.

withDockerServer and withDockerRegistry are built-in wrappers by Jenkins’ docker-plugin and allow us to use a remote host to build the docker image (very handy when running the Jenkins master inside a container itself) and to define a custom private docker registry (most likely you do not store your companie’s docker images on dockerhub).

Finally, let us add some visibility to our build by sending the build status to a slack channel. We slightly modify our build.groovy:

That’s it! We now have a Pipeline which handles our Docker image builds for specific branches and sends the results to a Slack channel. In a future post I will show how to share Groovy libraries between Jenkins jobs to apply the DRY principle to your Pipeline code.